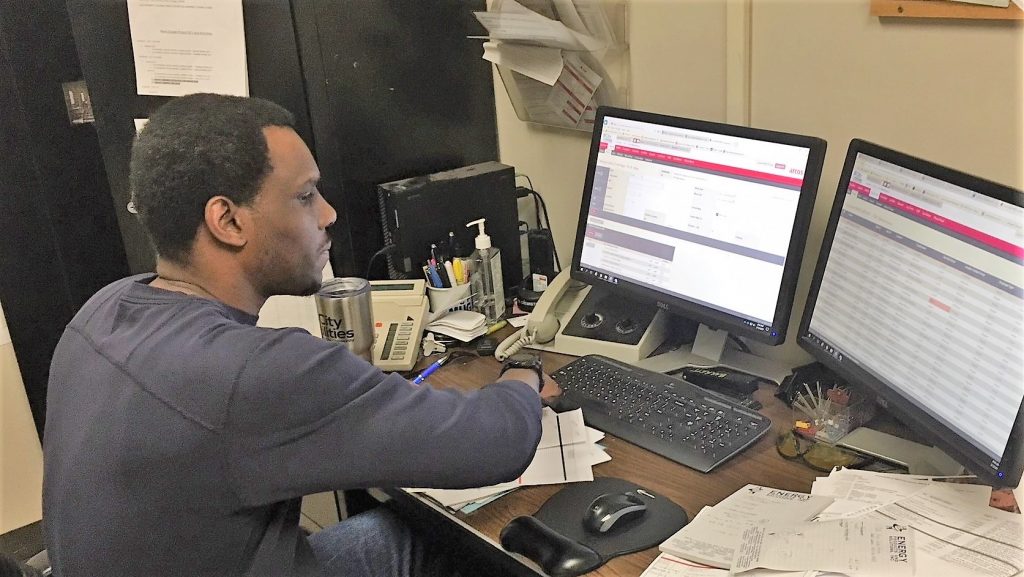 Pictured is City Utilities of Springfield Maintenance Supervisor Frederick Johnson at his desk inside the John Twitty. Energy Center reviewing an automated work roster in the ARCOS Callout and Scheduling solution.

In 2016, Haffecke, the director of Power Generation, and Nelson, an outage planner/scheduler, along with their coworkers implemented the ARCOS® Callout and Scheduling solution at CU’s John Twitty Energy Center, James River Power Station, Noble Hill Landfill Renewable Energy Center and McCartney Generation Station to automate the forecasting, planning and call out of electrical, mechanical and operations personnel.

As a power plant supervisor earlier in his career, Nelson knew the pain of trying to get people on site for overtime, holdovers or emergent work.

“You’d spend time on the phone, in the middle of the night, going down a list trying to get the right craft and combo of crafts to come to the site; sometimes you’d spend an hour or more,” recalls Nelson. “That’s time as a supervisor you can use to go out to the job, verify the necessary tagging is in place and prep for repairs.”

According to Nelson, when Haffecke came from CU’s electric department to become director of Power Generation, he brought with him knowledge of the ARCOS system in place for City Utilities’ linemen. Haffecke and Nelson compared notes and analyzed the situation.

Johnson, a supervisor for power station maintenance, Carter, the operations supervisor, Jordan, an office administrator during the implementation, and Baxter, an office administrator, quickly got behind the effort when they saw it was something that would make things right for CU. For example, with ARCOS supervisors can launch a callout from home, which speeds up the process of getting workers into the plant for emergency or routine work. If an environmental issue arises and CU needs all-hands on deck, or has to relay critical information, the ARCOS emergency notification feature can fire off a news bulletin to everyone in seconds.

As the team rolled out the ARCOS solution, they made use of CU’s “Thursday tailgates” to explain the benefit to workers.

“There was apprehension because some people don’t like change,” says Nelson. “But we can now let the software takeover by getting personnel on-site based on the craft needed, their position on the overtime list, and qualifications, so supervisors can go back to overseeing our plants.

“We tailored it to meet our needs in Power Production to be fair, equitable, and we have the ability to make changes as needed,” adds Nelson.

Between January 2017 and March 2018, CU has launched 249 callouts, which would have required hundreds of hours of supervisors’ time to complete manually.

Utility workers often go unnoticed. When something breaks, the spotlight shines on workers who restore service. But the industry is also filled with heroes, like those from CU, who make things right not in response to an emergency, but because they simply see a better way.