Press enter to begin your search

ARCOS to Launch Portal for Utilities and Contractors

Read about it here.

Ground Support Worldwide magazine has published an article in its October edition describing Piedmont Airlines’s use of ARCOS RosterApps.

From the article:  “[Piedmont’s] planning and support group now uses ARCOS RosterApps regularly to analyze, for instance, a current bid for a station by looking at coverage hours and comparing future flight schedules and plane requirements by overlaying the two and seeing the variance. If they note a variance, they can alert operations and suggest a new bid. This would shift coverage, so the station avoids being understaffed.”

How can a utility efficiently know who’s helping restore power?

Electric Light & Power has published our own Jim Nowak’s latest column which features his thoughts on how a common roster could, in part, aid utilities planning for and responding to a major event.  Read it here!

Electric Light & Power magazine’s “PowerGrid” website has picked up the news about ARCOS’ work with Nebraska-based Lincoln Electric System. Learn more about how LES plans to use ARCOS to reduce SAIDI scores and more.

Finding Efficiency Gains under the Radar 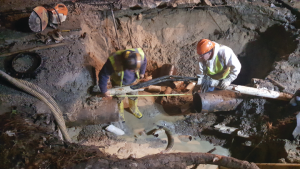 In an article for Water World, ARCOS’ CEO, Bruce Duff, writes about how small outward changes can have a huge impact when taken together as a larger strategy to improve utility operations.

LARA Magazine has published a story about Envoy Air’s selection of ARCOS RosterApps! Read on to find out how our workforce management solution is replacing and automating computer and paper systems for 13,000 employees! We’re on page 57.

How Can We Put Restoration History to Work for a 30-Second Decision?

In his latest Electric Light and Power article, our own, Jim Nowak, takes a look at AI and how it can use restoration history to make fast decisions to get work done and done now. Read more here.

Gaining a Unified Command of the Situation After Hurricane Maria

In his latest article for TD World, ARCOS’ Jason Singer, takes a look at the aftermath of Hurricane Maria and the effect it had on restoration efforts in Puerto Rico.

The Envoy-ARCOS partnership was a featured news item in Air Transport World’s MRO Briefs! Read more about it here.

We’re proud of our partnership with Envoy Air and excited to see it featured in AerospaceTechWeek.com! Read how ARCOS RosterApps is going to handle Envoy’s ground staff shift bidding, trading and filling, and improve efficiency. ARCOS RosterApps can help your organization too. Schedule a demo and find out how we can minimize holes in any roster and save your crew time, energy and effort!