A Happy Ending to the ‘Cost-Recovery Nightmare’ 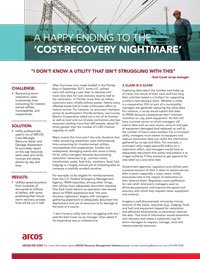 After Hurricane Irma made landfall in the Florida Keys in September 2017, some U.S. utilities were still working a year later to tabulate and track crew data for cost-recovery reports tied to the restoration. In Florida, more than six million customers were initially without power. Nearly every affected locale had to make a Herculean effort to restore service. For instance, to reconnect members across its southwestern Florida territory, Lee County Electric Cooperative called out a mix of its linemen as well as local and out-of-state contractors and tree resources totaling more than 600 people, about 20 times greater than the number of LCEC linemen regularly on staff.